One of the most desolate stretches of railroad in the West. Travelling along it is a crowded troop train, bound for the cholera-stricken garrison at Fort Humboldt. On board are the Governor of Nevada, the daughter of the fort's commander and a US marshal escorting a notorious outlaw. Between them and safety are the hostile Paiute Indians - and a man who will stop at nothing, not even murder... 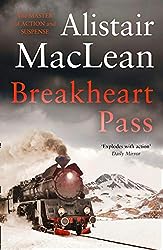 
Breakheart Pass is a novel by Scottish author Alistair MacLean (1922–1987), first published in 1974. It was a departure for MacLean in that, despite the thriller novel plot, the setting is essentially that of a western novel, set in the Sierra Nevada of the American West in the late 19th century. Fans of MacLean will recognize the usual plots twists, thrill-packed finale, and trademark sardonic dialogue. Unfortunately, for American audiences, MacLean was less successful capturing an authentic tone of the western frontier, and the 1975 movie version starring Charles Bronson, Richard Crenna, Ben Johnson, and Jill Ireland, proved to be more popular with the public than the novel.

Train with medical supplies and small U.S. Army unit is heading through Rocky mountains towards plagued Fort Humboldt. Among its passengers are territory governor, priest, doctor and U.S. Marshal with his prisoner, John Deakin. However, nothing on that train is what it seems.