Bruno Wildermann of the Wrinfield Circus is the world’s greatest trapeze artist, a clairvoyant with near-supernatural powers and an implacable enemy of the East European regime that arrested his family and murdered his wife.

The CIA needs such a man, and recruits Bruno for an impossible raid - on the impreganble Lubylan fortress, where his family his held.

Under cover of a circus tour, Bruno prepares to return to his homeland. But before the journey even begins a murderer strikes twice. Somewhere in the circus there is a communist agent with orders to stop Bruno at any cost… 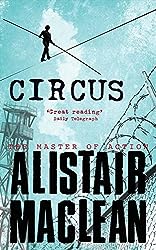 Circus is a novel written by the Scottish author Alistair MacLean. It was first released in the United Kingdom by Collins in 1975 and later in the same year by Doubleday in the United States.