The guns of Navarone have been silenced, but the heroic survivors have no time to rest on their laurels. Almost before the last echoes of the famous guns have died away, Keith Mallory, Andrea and Dusty Miller are parachuting into war-torn Yugoslavia to rescue a division of Partisans … and to fulfil a secret mission, so deadly that it must be hidden from their own allies. 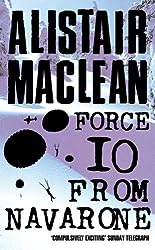 
Force 10 from Navarone is a World War II novel by Scottish author Alistair MacLean. It serves as a sequel to MacLean's 1957 The Guns of Navarone, but follows the events of the 1961 film adaptation of the same name. It features various characters from the film who were not in the book, and leaves out major characters from the book.

Films of Force Ten From Navarone

Mallory and Miller are back. It seems that there was traitor with them at Navarone, whom they thought was executed. But it seems that not only was he not executed, and he was not a traitor but a German spy. Intelligence believes he made it to Yugoslavia and is now with the Partisans. So, Mallory and Miller being the only ones who can positively identify him are sent along with a unit called Force 10, which is led by Colonel Barnsby, who objects to their presence. It seems that Force 10 has a mission of their own which Mallory and Miller know nothing about. When their plane is shot and most of the team is killed, they mistakenly believe that some of the locals they meet are Partisans but in reality are German Allies, so they are taken prisoner, and have to convince the German commander that they are not spies or else they will be killed.

Articles for Force Ten From Navarone