Hamilton knows the way to the ruins deep in the Brazilian jungle - and the secret they hold.

The millionaire who calls himself Smith seeks the lost city to avenge a wrong from his hidden past.

Their journey down the River of Death is an epic of violence and danger. But the secret that awaits them in the lost city is more dangerous still - as a legacy of theft, treachery and murder stretching back to war-torn Europe comes to a deadly climax beneath the ancient walls. 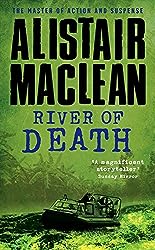 
River of Death is a novel by Scottish author Alistair MacLean, first published in 1981. As with most of MacLean's novels, it depicts adventure, treachery, and murder in an unforgiving environment, set this time in the steamy jungles of South America.

Films of River Of Death

An adventurer (Hamilton) decides to go in search of the lost city in the Amazon jungle. A motley crew of other people with reasons of their own decide to join him for the wealth of the lost city. But to their horror they find out that they have bit off more than they can chew. What with a nazi doctor still doing his experiments on people in the same place.