The Guns Of Navarone

The Guns Of Navarone

Twelve hundred British soldiers isolated on the small island of Kheros off the Turkish coast, waiting to die. Twelve hundred lives in jeopardy, lives that could be saved if only the guns could be silenced. The guns of Navarone, vigilant, savage and catastrophically accurate. Navarone itself, grim bastion of narrow straits manned by a mixed garrison of Germans and Italians, an apparently impregnable iron fortress.

To Captain Keith Mallory, skllled saboteur, trained mountaineer, fell the task of leading the small party detailed to scale the vast, impossible precipice of Navarone and to blow up the guns. The Guns of Navarone is the story of that mission, the tale of a calculated risk taken in the time of war… 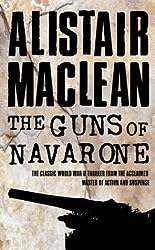 
The Guns of Navarone is a 1957 novel about the Second World War by Scottish writer Alistair MacLean that was made into the film The Guns of Navarone in 1961. The story concerns the efforts of an Allied commando team to destroy a seemingly impregnable German fortress that threatens Allied naval ships in the Aegean Sea and prevents over 1,200 isolated British Army soldiers from being rescued.

Films of The Guns Of Navarone

1961The Guns of Navarone

Two powerful German guns control the seas past the Greek island of Navarone making the evacuation of endangered British troops on a neighboring island impossible. Air attack is useless so a team of six Allied and Greek soldiers is put ashore to meet up with partisans to try and dynamite the guns. The mission is perilous enough anyway but are the Germans on the island getting further help too?.

Articles for The Guns Of Navarone