Mordon Chemical Research Centre: an ultra top secret facility hidden in the English countryside and one of the most secure places in the world. But now it has been broken into and the Satan Bug, the deadliest toxin in the world, has been stolen.

Private detective Pierre Cavell is recruited by the British Secret Service to investigate, and it soon becomes clear that not everyone is who they seem.

And then a letter is sent giving the authorities just 72 hours to meet the thief’s outrageous demands. There is no way they can pay the ransom, but if they refuse he will release the virus… 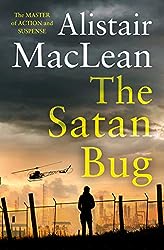 The Satan Bug is a first-person narrative thriller novel written by Scottish author Alistair MacLean. It was originally published in 1962 under the pseudonym Ian Stuart, and later republished under MacLean's own name.

Articles for The Satan Bug ?