Millions of pounds in gold bullion are being pirated in the Irish Sea. Investigations by the British Secret Service, and a sixth sense, have bought Philip Calvert to a bleak, lonely bay in the Western Highlands. But the sleepy atmosphere of Torbay is deceptive. The place is the focal point of many mysterious disappearances. Even the unimaginative Highland Police Sergeant seems to be acting a part. But why? 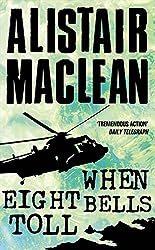 
When Eight Bells Toll is a first-person narrative novel written by Scottish author Alistair MacLean and published in 1966. It marked MacLean's return after a three-year gap, following the publication of Ice Station Zebra (1963), during which time he had run several restaurants.

Films of When Eight Bells Toll

In a vein similar to the James Bond movies, British Agent Philip Calvert (Sir Anthony Hopkins) is on a mission to determine the whereabouts of a ship that disappeared near the coast of Scotland.

Articles for When Eight Bells Toll