Winter 1943, and US General Carnaby has been captured by the Nazis. He is being held in a fortress high in the Bavarian Alps. headquarters of the German Secret Service, and in his head are plans for the invasion of Normandy.

A special team of British commandos, a US Army ranger and a female secret agent is hurriedly assembled. Their mission: parachute into the area, break in to the alpine Castle, and rescue General Carnaby before the Germans can interrogate him.

But unknown to all, there is another mission, and someone in the group is a traitor… 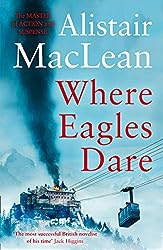 
Where Eagles Dare is a 1968 war film directed by Brian G. Hutton and starring Richard Burton, Clint Eastwood and Mary Ure. It follows a joint British-American Special Operations Executive team of paratroopers raiding a castle. It was filmed in Panavision using the Metrocolor process, and was distributed by Metro-Goldwyn-Mayer. Alistair MacLean wrote the screenplay, his first, at the same time that he wrote the novel of the same name. Both became commercial successes.

Films of Where Eagles Dare

During WW2 a British aircraft is shot down and crashes in Nazi held territory. The Germans capture the only survivor, an American General, and take him to the nearest SS headquarters. Unknown to the Germans the General has full knowledge of the D-Day operation. The British decide that the General must not be allowed to divulge any details of the Normandy landing at all cost and order Major John Smith to lead a crack commando team to rescue him. Amongst the team is an American Ranger, Lieutenant Schaffer, who is puzzled by his inclusion in an all British operation. When one of the team dies after the parachute drop, Schaffer suspects that Smith's mission has a much more secret objective.

Articles for Where Eagles Dare

Videos related to Where Eagles Dare


In conversation with... the Where Eagles Dare film-makers